The Tales of Chateau Forest - Houston, The Early Years

So a little under two years after we moved in to Chateau Forest, I was offered a job at a Phoenix department store.  Our little house sold without listing and we walked away with a tidy sum for a down payment on our new home in Phoenix.  Our new place was small but cute.  It had a diving pool and a mountain view out the back windows.  We thought we'd hit the big time and we went nowhere but up after that.  The experiences of lovely Chateau Forest always made us so much more appreciative of life as we worked our way up through the decades.  Now our current neighbors preach about living "in one" with the rabbits and bobcats that frequent the Plano suburbs.  Those critters wouldn't have lasted long in Chateau Forest.


Our Phoenix home bought in '76 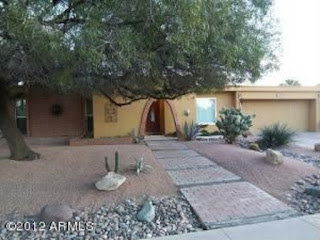 Posted by John Sullivan at 6:20 PM

John Sullivan
At a point in my life where I trust my intuitions about life more than ever. This blog is meant to express my feelings about personal occurrences and occasionally delve into societal issues as seen from my Baby Boomer eyes. It's cathartic for me and I hope meaningful on some level for the reader. There's no grand plan to write books on mastering life nor will I attempt to change your political views. A FB friend recently commented on a post of mine that "Wow! You really are a mellow guy." Not really the case, but with maturity and a less frantic work pace, I'm just noticing things that, in the past, I would have rushed by. I encourage your feedback.